STELLAR STAR OF THE MONTH - FEBRUARY 2015 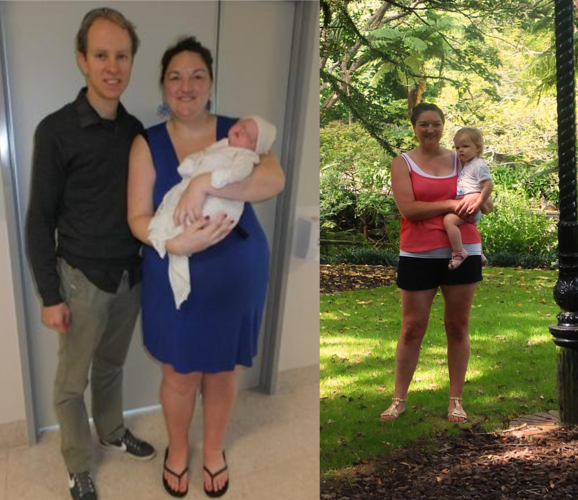 Hi, my name is Elizabeth.
So, before I was pregnant with my daughter, I was that person you would see walking to work on Lambton Quay from Newlands.....the long way. Yes, via Khandallah, with a pack. Sometimes home again on a good day. Purely for the joy of fitting fitness into my busy work day. I was an easy size 14 (which at 5’10” wasn't a bad size) and was quite comfortable with my body.

It was at five weeks pregnant the nausea started and then that was it...vomiting for the next 35weeks. Non-stop. Six hospital admissions with high blood pressure, too much fluid, kidney infections, carpel tunnel, displaced hips, packed up knees, pitting oedema etc etc. At 30weeks my ‘bump’ (a mountain on Mars) suddenly measured 36weeks and didn't stop growing. More tests.

No ability to exercise. I went from walking to work to barely making it to the bus stop most days and walking up the stairs was a once a day necessity. I gave up work months early and couldn't even get myself out of the pool at Johnsonville in the last two months on my own. Awkward to say the least!

45kg of weight gain. Yes. 45kg. I was eating to try and stop the nausea and retching nothing. I could eat a limited number of foods and I could barely move. They stopped weighing me in the end because it was just too traumatic. For me, the medical professionals and the poor scales.

Then, at a week overdue and 36hours of pointless labour, I had an emergency c-section that went wrong and three operations following that. I had a whopping 11lb baby girl - yay!!! A week later I left hospital and pushed off 7kg pretty quickly...NOT through breastfeeding as every new mum in skinny jeans (if this is you, you have no idea how blessed you are) told me would happen...every time I pushed myself too much I couldn't feed my baby, so it was a fine balance.
So, in total I gained 45kg, gave birth to 5kg of it and then pushed off 7kg fairly easily. That leaves 33kg. For the first 8 months I had repeated infections and was only well for about one week a month, but by the end of the first year I had lost a total of 28kg.
It was then that I went to my first Stellar Fitness class. I had been out walking with the stroller once a day for months and doing You Tube exercise videos while baby was asleep on bad weather days and all I kept thinking about where the days when I used to do circuits classes in England and actually feel like I was going to die – why couldn't I feel that kind of challenge anymore?! Well I did!
And then Kat told me about Tabata...and then just after Christmas I tried Fight Fit (the fast punching thing)....and that's my exercising life now really :) Its become part of my routine. I love the people, I love (hate and the love again and then hate again and then love again) the exercises. I love the variety, I love the encouragement Kat gives us (how does she remember all our names??) and I love that it works for me and I see it working for everyone around me, every time, every week, without fail.
Now I have lost a total of 37kg of the 40kg left after childbirth....and I’m still going. I actually am going for another 2kg after that just because I know I can!
The pictures are of me leaving hospital and then me at Christmas time 2014....not quite where I want to be yet, but slowly getting there. My husband looks strangely unaffected by both pregnancy and childbirth....he had already lost that hair before the stress.

I know there a many pregnancy/childbirth story and a million of them will be worse than this one (I have no doubt) but this is what brought me to where I am now, and one day I will tell my daughter, at length, while she is fanning me, feeding me grapes and counting the pocket money she's saved for my tummy tuck.